The Order's sign is performed by laying the right hand on the heart followed by clapping the hands with two slow and two fast claps. The right hand is then moved back to the heart at the same time as all present state aloud the Order's motto from 1935 "Remind us of the past and bear in mind the future". 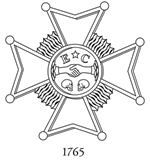 The Order's primary insignia is the Star of the Order. This consists of a four-armed eight-pointed silver star, in the centre of which appear two joined hands with the letters E C above and two skulls beneath. The whole is surrounded by a garland of flickering flames. The Star of the Order is worn on a sash or riband.

Within the order, there are seven Degrees, in which the Seventh Degree is the Order's highest Degree.
New members enter in the First Degree.

Entrance to higher Degree membership can be earned by members who fulfil the conditions for a higher Degree, and who have submitted a written request and been assessed by the General Conclave. In the request, the member should describe the motives that form the basis for entrance to the higher Degree. This should include the years in which he/she has participated, with current Degree and stating membership number, name, address and telephone number.

The 1874 Degree system was reintroduced for Commemoration Day 1997